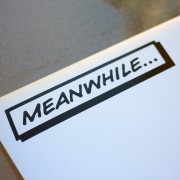 If you were asked to create a list of “Important Words for the Christian’s Life,” what words would make up your list? Salvation, forgiveness, mercy, grace, love, faith and prayer would surely appear. Perhaps you’d add the fruit of the Spirit. All of these would be on my list, plus one more.

Meanwhile? That’s not even a noun. I know. It’s an adverb meaning “during the interval” or “at the same time.”

Let’s look at the story of Peter and Cornelius to see the importance of “meanwhile.” Take a moment to read Acts 10:1-48.

Verses 1-8 tell us about an angel visiting Cornelius, a Roman army officer who was deeply devoted to God. In the vision, the angel told Cornelius that God had heard his prayers and accepted his gifts to the poor as an offering. “Now send some men to Joppa, and summon a man named Simon Peter,” the angel said.

Now I must admit that my response would have been to interrogate the angel. Who is Simon Peter? Why on earth would he come see me? He doesn’t know me!

Cornelius, however, obeyed the angel and immediately sent three of his men to fetch Simon Peter.

And here we see the first “meanwhile.”

Meanwhile, as Cornelius’ men are traveling to Joppa, Simon Peter has a vision as he’s praying. The vision, dealing with Jewish dietary laws, is repeated three times. At the time, Peter doesn’t understand why he is being told, “Do not call something unclean if God has made it clean” (v. 15). Verse 17 describes him as “very perplexed.”

And here comes the second and third “meanwhile.”

Meanwhile, while Peter is trying to comprehend what the vision means, the men arrive from Caesarea and ask for Peter.

Meanwhile, even as Cornelius’ men are downstairs asking for Peter, the Holy Spirit is telling Peter that visitors have arrived and that he should go with them.

So Peter gets up, finds the men who have come for him and accompanies them back to the home of Cornelius.

Meanwhile, back home in Caesarea, not only is Cornelius waiting for Peter to arrive, he has “called together his relatives and close friends” (v. 24). When Peter arrives, he finds a house packed with people eagerly waiting to hear what Peter has to say. And so the Good News of Jesus spreads to the Gentiles.

This story holds numerous lessons but for now, I want to focus on this one idea: we never have knowledge of the “meanwhile” until it’s in the past. Cornelius and Peter both acted on what God led them to do, though they had no knowledge of what God was doing in the other man’s life. It wasn’t until the men met face-to-face and they pieced together their stories that the “meanwhile” became clear.

God is the creator and orchestrator of our “meanwhiles.” Whatever you’re going through right now, rest assured that “meanwhile,” somewhere, somehow, God is working in other people’s lives, preparing the way for your paths to cross. He is doing things you cannot begin to imagine. We, in turn, are called to obey Him, whether or not we understand what He’s doing.

Meanwhile, “all glory to God, who is able, through his mighty power at work within us, to accomplish infinitely more than we might ask or think” (Eph. 3:20).