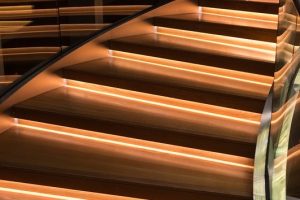 One of my favorite Broadway shows is 42nd Street. The musical features classic songs such as “We’re in the Money,” “Lullaby of Broadway,” and, my favorite, “I Only Have Eyes for You.”

And then, of course, there’s the spectacular title number—a dance performed on a staircase spanning the width of the stage. In one production I attended, the staircase lit up on cue, one cascading step at a time. The visual effect was that the dancers were stepping onto thin air as they descended the staircase. But the moment they took the next step, the stair lit up and became visible to the audience. The result was dazzling.

I was reminded of this number from 42nd Street recently when I read a line in Streams in the Desert: “Faith steps on seeming void, and finds the rock beneath.”

Sometimes, stepping out on faith means laying the thing (or person) that you hold dearest – the thing that you’ve waited for, planned for, longed for, prayed for – faith is laying that treasure on the altar and being willing to sacrifice it to God, even when it doesn’t make sense. Consider Abraham and Isaac in Genesis 22:1-18.

Sometimes, stepping out on faith means creating something as God instructs you to—even when it seems absurd to other people – simply because He clearly told you to do so. Surely God’s instructions to Noah in Genesis 6 seemed absurd.

Sometimes, stepping out on faith means packing up everything you own and moving, even though you don’t know where you are going. That’s what Abraham did. God told him to leave his home and go to a land that He would show him (Genesis 12:1). Everything within me wants to know the outcome before I begin the journey but that’s not God’s way. He requires that my journey consist of many, many steps of faith.

Sometimes, stepping out on faith is stepping into the water before God provides a pathway on dry ground, as happened in Joshua 3:9-17. I feel sure that had I been one of the priests who had to step into the water, I would have reminded God of one of His prior miracles. You know, the one where He parted the waters before Moses and the Israelites had to step across. How about doing it that way again, God?

But God isn’t a cookie-cutter God. Every relationship He has with one of His children is a deeply personal relationship. He sees our hearts. He knows our needs. And He requires our faith. Faith in Him, not in ourselves and certainly not faith in other people.

In the end, faith means to step out in confidence in our Almighty God who always keeps His Word. It’s stepping by faith onto what appears to be thin air and finding that God is already there.

So wait until God gives you clear direction but when He does, step out on faith. God is our Light (Psalm 119:105) and when we step out on faith, what appears to be invisible will become visible. The result may very well be dazzling.