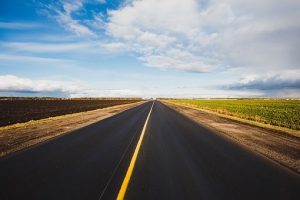 The story begins in November of 2008 when my husband experienced a coup d’etat that resulted in his termination. We had been at the church 7 years. To say we were devastated is putting it mildly. All of our plans for the future, everything we thought the future would include, suddenly came crashing down. Our lives were completely dismantled. At the time, my husband had been in the middle of preaching through the book of James. Shortly after we were terminated, we discussed James 4:13-15 with a new, albeit painful, perspective.

Come now, you who say, “Today or tomorrow we will go into such and such a town and spend a year there and trade and make a profit”—yet you do not know what tomorrow will bring. What is your life? For you are a mist that appears for a little time and then vanishes. Instead you ought to say, “If the Lord wills, we will live and do this or that.” (James 4:13-15 ESV)

Wow, was James ever right! Over time, we summarized the meaning of those verses with just 2 words, “We’ll see.” In fact, we began to refer to “We’ll see” as our family moto.

It took over a year for us to get our feet back under us and begin making any forward progress. During that time, we moved in with my father-in-law and applied for every job imaginable. With each job posting that looked remotely promising, we’d apply, shrug our shoulders and say, “We’ll see.” On days when the pain of the termination seemed too much to bear, “We’ll see” had a definite tone of dejected uncertainty.

In January 2010, we finally found jobs. Eventually, we bought a house and began rebuilding our lives. And as years passed, we began to heal. Slowly. Very slowly.

In 2016, I published an account of what it took to rebuild our lives in Moving On: Surviving the Grief of Forced Termination. God used the response I received from wounded ministers and ministers’ spouses to plant within my heart the desire to devote all my time to helping ministers who have been forced out of their churches, either through termination, forced resignation or pressured retirement. For 2 years, the ideas, dreams and desire grew.

In the Fall of 2018, my husband and I attended a conference where we heard Andy Hagen preach. At the time, I was very uneasy. I was on the cusp of the greatest step of faith God had ever called me to make and I was terrified. Absolutely terrified.

Throughout the year, God had laid it on my heart that I was to start a new nonprofit that would minister to pastors who have been terminated. To do that would mean leaving a job I’d held for 9 years—a job that provided a nice, steady income. But God had been leading and I’d been following, laying the groundwork for what would become Pastors’ Hope Network. The plan was to resign my job at the end of 2018 and launch the new ministry in January 2019. I was certain that this was what God wanted me to do. I was certain that He had called me to start this new ministry.

And then funding fell through. And things got rough. I was hurt and confused. Why had God led me to do so much work and then allow this important factor to come apart?

And so, when we arrived at the conference, I was in the midst of a huge crisis of faith. But clearly God had a word for me when Andy Hagen opened his first message by saying, “You cannot separate what God wants to do through you from what He wants to do in you.”

God used all of Andy’s messages throughout the conference to speak directly to my heart as he examined the life of Abraham. The clincher came when he got to Genesis 22 and explained that the meaning of Jehovah Jireh is “We’ll see. We. Will. See.”

I will never forget the moment Andy spoke those words. My husband and I looked at each other, knowing that God had just spoken. And we had heard.

I came home from the conference with a renewed commitment to leave my steady job and launch Pastors’ Hope Network in January, whether funding was there or not.

When January arrived, we stepped out on faith and God has provided. I can honestly say that this is the most exciting faith journey I have ever made.

In August, Pastors’ Hope Network received a donation. As I opened the check and my eyes fell on the generous amount, Great Is Thy Faithfulness began playing on Pandora, immediately followed by ‘Tis So Sweet to Trust in Jesus. I laughed out loud with delight, recognizing that God was with me in a tangible way saying, “See? I AM faithful. I CAN be trusted.”

When I texted my husband about what had just happened, he wrote back, “We will see.”

We no longer say “We’ll see” with a shrug, but rather it is a declaration of our faith. We. Will. See.

Running Pastors’ Hope Network leaves me little time to blog. In fact, the last blog I wrote was 4 months ago. I’m not sure I can keep up with multiple websites and Facebook pages, much less blog on a regular basis. So I invite you to check out the Pastors’ Hope Network website and follow us on Facebook.

And please, above all else, pray for this new ministry. God is at work, doing more than we could ask or imagine. He is faithful. We can trust Him.