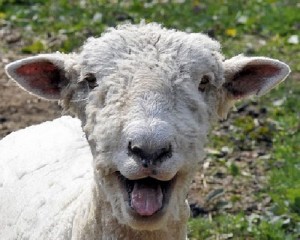 I really like the photo of the sheep that’s helping me narrate this series of posts on Psalm 23. He seems to be talking to me and, for whatever reason, the lamb makes me smile. Take a close look at his face. You can almost hear him squeal with delight as he brags, “the Shepherd restores my soul!”

To fully understand what the sheep in Psalm 23 means by “He restores my soul,” we need to look at Psalm 42 where three times in just eleven verses the psalmist describes his soul as being “cast down.” Some translations say “downcast.” Either way, it appears that the psalmist speaks of being discouraged or despondent.

While being cast down certainly includes the ideas of being discouraged or despondent, the meaning goes much deeper and can be easily missed by those with little to no knowledge of sheep. Most of us are a long way from the sheep farm. But the psalmist’s original audience—nomadic people who were, themselves, shepherds understood exactly what it meant to be “cast down” because they were always on the lookout for a “cast down” sheep. Here’s what one looks like: 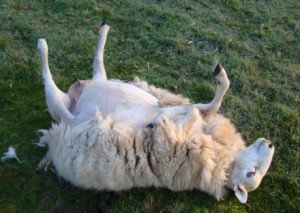 Seriously. How does a sheep get into that position? It happens something like this: The sheep lies down to rest and as it tries to get into a comfortable position, everything within its body shifts. If the sheep panics and begins to flail around, the situation becomes worse as gravity takes over. Suddenly the sheep’s feet no longer touch the ground. Before long, with one final shift of its internal organs, the sheep finds itself completely on its back, all four legs pointing skyward. If left in such a position, the sheep can die within a matter of hours.

That’s why a shepherd watches closely for a cast down sheep. When he finds one, he immediately starts a process to restore the sheep to an upright position. First, the shepherd gently rolls the sheep onto its side. After giving the sheep time to adjust to being back on its side, the shepherd lifts it into a standing position, all the while evaluating its stability. If the sheep has been down for a long time and is wobbly, the shepherd will straddle the sheep while he rubs its legs to get the circulation going. Not until the sheep’s equilibrium has fully returned will the shepherd send it back to join the rest of the flock. (Phillip Keller, A Shepherd Looks at Psalm 23)

The gentle process by which a shepherd restores a cast down sheep back to its feet is what is meant by the brief phrase, “He restores my soul” (Psalm 23:3). No wonder the sheep of Psalm 23 brags about his shepherd! It’s a beautiful picture of the intimate, compassionate relationship between the Good Shepherd and His sheep.

If everything in your world has suddenly shifted and you’ve found yourself on your back, unable to move, take heart. Your Good Shepherd will restore your soul. You may be on your back right now, but He will not leave you there. Getting you back on your feet is a process, and at times you may feel lightheaded and weak in the knees, but the Shepherd will be by your side every step of the way.

I’m so grateful I have a Shepherd who loves me enough to pick me back up when life knocks me down. If He loves me that much, surely I can trust Him when I “walk through the valley of the shadow of death.” But that’s for next week. For this week, I will rejoice in the gift of His restoration.