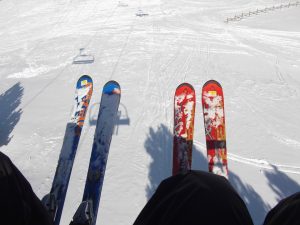 If you missed Part 1, you can check it out here.

Lesson 4: Sometimes someone much stronger has to get you off the mountain.

One of the most fascinating examples of skiing I ever witnessed occurred at the end of the day. I’d just gotten off the lift, ready for the final run, when I noticed a skier who was not just tired, she was exhausted. Fatigue had set in and she simply did not have enough strength to ski down the mountain. Right about the moment she was going to call the ski patrol for help, an expert skier – one of the men in her group – skied up behind her. He placed his skis on the outside of the woman’s skis, put both of his poles in his right hand, wrapped his left arm around her waist and off they went down the mountain. The expert skier determined the speed. He controlled the turns. He kept the exhausted skier upright as they made their way to the bottom of the mountain. All she had to do was yield to his control.

Are you exhausted from the mountains you face in life? Let your heavenly Father ski you down safely. Allow Him to wrap His arms around you. Let Him determine the speed and control the turns. He will get you to the bottom of the mountain. He always does.

Lesson 5: Sometimes you have to be carried off the mountain.

If you’re going to learn to ski well enough to advance off the bunny slopes, there’s a good chance you’ll eventually twist a knee or injure some other body part. Even expert skiers sometimes fall and break a leg or tear their ACL. When that happens, there’s no option but to have the ski patrol carry you off the mountain in a sled. (It’s actually a pretty awesome view from down there.)

When you live, really live, you’re going to get hurt. Because really living means taking risks. It means loving people who might not love you in return. It means trusting people who may betray your trust. It means investing your life in the lives of others when the return on your investment may be very small or nothing at all. Living fully means living with the knowledge that you may get hurt and feel pain more intensely than you’ve ever felt before. If that happens, when that happens, you’ll need other people to carry you.

For some reason, Christians often have a hard time allowing other people to carry them. But the idea of carrying each other through the tough times of life is biblical. The second chapter of Mark tells the story of a group of men who carried their paralyzed friend to Jesus because the man had no other way to get himself before the Lord. Paul commanded the believers in Galatia to “Carry each other’s burdens, and in this way you will fulfill the law of Christ (Galatians 6:2). Most of us would rather help carry someone else, but sometimes we have to allow ourselves to be carried.

Lesson 6: You have to take a break.

The National Ski Areas Association puts it like this: “If you’re tired, stop skiing.”

It sounds so simple. But many skiers insist on “just one more run” and wind up falling or being too tired to control their speed and losing control. Wise skiers know when to take a break during the day. They know they are more prone to have an accident if they ski until they are fatigued. They often will rest an entire day between days of skiing.

When is the last time you took a break? I know. I can hear some of you chuckling. With today’s technology, it’s almost impossible to get away from distractions. But God’s command to rest still stands. The Old Testament repeatedly commands people to rest on the seventh day of the week. And when “so many people were coming and going that they did not even have a chance to eat,” Jesus told His disciples, “Come with me by yourselves to a quiet place and get some rest” (Mark 6:31). Granted, it was a brief time of rest because the crowds followed them, but Jesus and the disciples did get away for a little while. The point is, if Jesus saw the need to leave the world behind and get away for some rest, why do we think we can survive without doing the same?

Wherever you are on the slopes of life, whether you’re waiting in line for the chair lift, leisurely skiing down a trail, taking a break beside the fireplace or experiencing pain after a fall, I pray that our heavenly Father will surround you with the people you need to assist you in living life to the fullest.