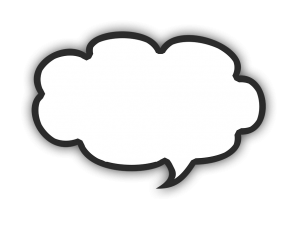 While attending a wedding recently, a friend commented that she and her husband had gotten married in a little church that once stood where Times Square is now located. Without thinking—and, I might add, under the influence of allergy meds—I replied, “So you got married in New York City?”

Uh, no. Not unless they got married in the early 1900s. My friend was referring to the Times Square Cinema in our town, not Times Square in New York City which has been in its current location since 1904.

Like I said, I spoke without thinking. Which is what many people do when they come face-to-face with someone who is hurting. They don’t know what to say, and many of them genuinely want to make things better, so instead of just giving a hug they say something without thinking. Something really stupid.

Here are 6 statements which top my list of “Things I Hope I Never Say.”

God will never give you more than you can handle. Of course He will. Why in the world would Jesus tell us to call on Him and promise that He would give us rest unless life was more than we can handle (Matthew 11:28-30)? For more on this, check out this post from 2016.

You’ll find another church. Maybe. Maybe not. Statistically, the odds are against it, especially for older ministers. Regardless, the thought is not a comforting one, any more than telling grieving parents that “you can always have another child” brings an iota of comfort as they stand beside a fresh grave. Such flippant statements not only fail to bring comfort or encouragement, they demonstrate a complete lack of understanding about what the traumatic situation means to the couple.

I know what you’re going through. No, you don’t. At least not completely. Because no one’s experience of grief is identical to another person’s. Grief is intensely personal. Two widows sitting side-by-side may share a lot in common, but their grief experiences are still different. Two ministers who have experienced forced termination understand each other in ways others can’t, but their grief is different, nevertheless, because there are countless factors at work in grief. We can empathize if we’ve been in a similar situation, but we don’t know exactly what someone else is going through.

Time heals all wounds. Maybe. But even if healing eventually comes, scars remain for a lifetime. And scars can be painful, even though the wound is considered healed. Recently I spoke to a group of women about Moving On: Surviving the Grief of Forced Termination. As I recounted one part of our experience of being forced from the church my husband had pastored for 7 years, my eyes suddenly filled with tears. Out of nowhere! It’s been 9 ½ years, not 9 ½ months, yet the tears still came. The wounds have healed but the scars are still tender. That’s just the way grief works.

You need to get over this. This is a variation of “time heals all wounds.” After a well-meaning friend or family member decides that enough time has passed, they might decide that it’s time for you to “get over it.” But when a deep grief is experienced, you don’t “get over it.” You don’t forget. The memories will always remain. But time marches on. One day passes into the next and the next until months and years have passed. Hopefully, we will have intentionally sought God’s guidance and learned a new way to live—a way that has helped us begin to heal.